John Bel Edwards was re-elected Governor of Louisiana on Saturday, a real gambling supporter which gives gambling lovers hope to see online sports betting legalized in the state in 2020! 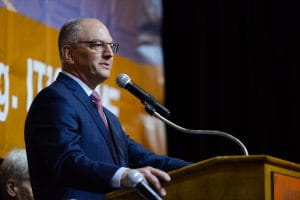 The Democrat, Edwards took the lead against his Republican rival, businessman Eddie Rispone, by a margin of less than 2% in what was supposed to be one of the country’s tightest government races and this are great news for Lousiana’s gaming lovers. Although gaming was not a major priority for either candidate, the two offered a different vision for Louisiana’s industry’s future In fact, next year, Edwards will have to work with a GOP-controlled legislature, but he has earned a reputation as a bipartisan with lawmakers and, meaning that at least, he will be an ally in the often contentious battle to approve sports betting.

Moreover, for the next four years, Louisiana will have a gaming attorney as its chief executive, however, what will happen next is still yet to be seen.

The good thing is that Edwards was able to work with Republican lawmakers, unlike other states with a governor and legislature from different parties. Louisiana’s political realities still make it hard for gaming legislation to do pass.

Therefore, gaming backers will have to navigate both industry conflicts and lawmakers, many of whom remain firmly opposed to any form of gaming.

Edwards ‘ victory, however, is an advantage precisely because it removes Rispone from the mansion of the governor as he would possibly have vetoed any efforts to create new laws on sports betting. Rispone advocated for Republicans to have full control over the government and conservative values of Louisiana. He also had shown his full support of President Trump’s backing, who twice visited Louisiana to advocate for Rispone.

This indicates that indeed, gaming interests clearly believe that they will gain from Edwards more than Rispone. With the Democratic influence, as well as, new developments in sports betting in neighboring Mississippi and Arkansas, there is still pressure to pass sports betting legislation.

“I want to be in a position to actually do it in Louisiana because we know it is happening in Mississippi,” – stated Edwards a while ago during an appearance at the Baton Rouge Press Club.

Louisiana’s governor also explained that legalizing sports betting at casinos around the state will help it stay competitive with other states so people who want to place sports wagers could do it in the casinos within the state instead of going to Mississippi.

Nevertheless, there is still a hope that having Edwards as governor once again, will help the state legalize sports betting and enter the game in competing against other states in this popular trend.