His Home Was Not Insured

Even when everything seems to be dark and everything seems to go wrong, hope shouldn’t be lost as everything can change overnight. At least that was the case with an Australian man who lost his family home in the wildfires across Australia won a lottery! The man purchased the winning ticket from thelott.com, played this wife’s lucky numbers and won a million dollars. 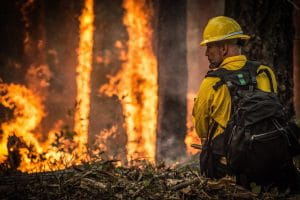 The lucky winner from Mount Cotton in Queensland stated that this was the perfect timing for winning a lottery as they have lost their family home in the fires across New South Wales and other regions in Australia.

“My family just lost their home in the bushfires in northern New South Wales and it wasn’t insured, so thank you very much. We didn’t know if we would ever be able to rebuild but now we definitely can.” – said the man who decided to stay anonymous after being told the great news from a lottery official while he was at work.

The Man Played With His Wife’s Lucky Numbers

The man was thrilled by the news that he couldn’t believe that he was the one to win one million dollars and even mentioned that he will give his wife a big kiss and a cuddle when he goes home.

The man explained that all that was left from his home were just a few charred teacups and that winning the jackpot feels like a miracle to him.

The lottery is quite popular in Australia where people decide to test their luck and purchase a ticket, however, not everyone is as lucky as this man and his wife are. Moreover, many people forget to check whether their ticket has the winning numbers and even take weeks to come forward and claim their prize. Nevertheless, this jackpot seems to be much needed in the case of this couple considered the fact that they have lost their uninsured home to the raging wildfires that continue to take part all across Australia.

Many Celebrities Have Helped Australia

In fact, officials from New South Wales explained that 1870 homes have been destroyed by the wildfires while millions of animals lost their lives.

On the other hand, the world seems to be worried as wildfires are still raging all across Australia. Many locals have been giving their best to help the victims. Moreover, many celebrities decided to make their contribution and raised millions to aid in recovery. Chris Hemsworth, Nicole Kidman, Leonardo DiCaprio, Kylie Jenner, and many others have donated large amounts to Australian charities.

Some of the countries even sent troops of firefighters and volunteers to help the people and animals affected by this big tragedy like Australia has never seen until now.

The anonymous man and his wife, on the other hand, received their aid in the form of a jackpot.