California could be next to join the several states which have already agreed to legalize sports gambling. This follows the 2018 ruling by the United States Supreme Court that states could legalize betting on college and professional sports if they choose. Before the Supreme Court ruling, Nevada was the only state to legally accept sports wagers. Following the ruling, Delaware, Mississippi, New Jersey, New Mexico, and West Virginia have seized the opportunity to generate additional revenue. California’s state constitution contains language forbidding sports gambling which would require an amendment. 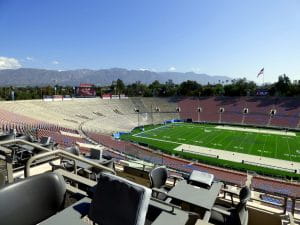 The difference between California and states which have previously chosen to legalize sports gambling is that in those states the decision was made by lawmakers. In California, a sports gambling measure will be voted on by citizens of the state, potentially as early as November 2020. However, it’s no guarantee that sports gambling will even make it onto the ballot. It would first require 66% of state legislators to approve the bill, and is expected to face opposition.

California has nearly 70 Native American casinos housing over 70,000 slot machines and 2,000 table games. These totals exceed any other state in terms of Native American gaming facilities. The last thing these gaming commissions want is more competition within the gambling industry moving into their backyard.

The Los Angeles Rams To Offer “Gambling” During Games

Sports gambling is still illegal in California but the Los Angeles Rams introduced a creative way to inch towards gambling without testing the limits of legality. The game is free to play and therefore not technically gambling. “Rams Pick’em” is played via the app on mobile devices and to those watching at home by visiting the web address TheRams.com/predict. Fans predict which player will be the first to achieve statistical milestones such as a 30-yard play or set number of rushing yards.

Additional plays and scenarios will be offered at halftime of each game. The values of accurate predictions increase as the game proceeds to create an incentive for those in attendance to stay for the duration. Fans earn points for each accurate prediction and those with the most points win prizes such as two tickets for a future home game, pregame field passes, and memorabilia autographed by players.

Rams’ VP of Media Marissa Daly told therams.com, “We are thrilled to bring our fans closer to the action with an engaging second-screen experience. We feel that our free-to-play predictions game will be a fun way for our fans to compete against one another while watching their Rams compete on the field.”

The Rams aren’t the only team experimenting by offering a quasi-gambling game. The Washington Redskins have a similar game which offers a cash prize of $1,000 to the winner of each quarter.