Oregon was one of the few states that allowed sports gambling before the 2018 landmark decision by the United States Supreme Court. Before the ruling, Oregon allowed betting through Sports Action, which only accepted parlay wagers and was limited to NFL games until 2007. Oregon Lottery spokesman Matt Shelby told CNBC it’s been a while since he was able to partake in a legal betting service recalling his college days of, “Figuring out what my picks were for the weekend and trying not to spend all my beer money.” 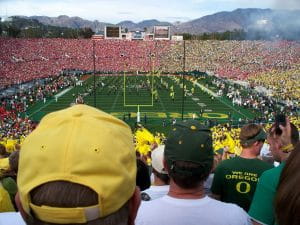 Following the 2018 Supreme Court ruling, Oregon is expanding legalized sports gambling. Scoreboard is the state’s new gambling website, and it’s accompanied by an app available for Android and iPhone. Both Scoreboard and its app are operated by the Oregon Lottery. Oregon becomes the 12th state to offer sports gambling via a mobile app. The Portland Trailblazers of the NBA are Oregon’s only professional team in the four major North American sports and Scoreboard will accept wagers on Trailblazers’ games.

Launching The App Was Delayed

The app was originally intended to be up and running for the start of the 2019 NFL season. However, there were some last-minute issues that delayed the launch until the middle of October. After addressing the issues, the app was put through a test trial earlier in the month. Six players were allowed to place wagers on live games. Two each on Android, iPhone, and desktop platforms to confirm it was functioning as intended in regards to depositing or withdrawing funds, and placing wagers.

Each bettor’s account will be insured by the FDIC. Accounts will be limited to a maximum of $250,000. Scoreboard has flexibility in regards to accepting wagers. Shelby told CNBC, “We’re not obligated to take all wagers. So, if someone came in theoretically, and had $250,000 in their account, and tried to put that down on a single game, it would be met with scrutiny, and frankly, I’d be surprised if we took it.

An additional restriction will be the implementation of geofencing. Geofencing will determine the precise location of the bettor. This will ensure only bettors physically within the state of Oregon are placing wagers but it’s also done to protect the interests of Oregon’s Native American tribes. Bettors who are physically on tribal land owned by the Confederated Tribes of Siletz Indians will be restricted from placing wagers on the mobile app. However, bettors will still be able to place wagers at the Chinook Winds Casino Resort which began accepting bets in August of 2019.

It’s projected that Oregon bettors will wager approximately $300 million in the first year of operation with about $5 million going to the state. The Oregon Lottery is expected to by generating upwards of $30 million in revenue by its third year of operation as costs for maintaining the app become less expensive.

A consumer-friendly feature of Oregon’s gambling program is that it won’t be charging users any fees. They hope that it will make betting on sports more attractive to casual gamblers.