Although casinos in Pennsylvania recorded a revenue increase of 1.1% in fiscal year 2018/2019, the slot machines had decreased by 3.4% from June 2018 to 2019. Individually, slots had both increased and decreased revenue results with six casinos recording an increase and six recording a decline. The largest increase was experienced by Valley Forge which recorded a 12% revenue increase. This has been contributed by the gaming expansion law which was passed in 2017.Valley Forge benefitted from the law, first because it is a category 3 casino and was allowed to remove the restricting $10 amenity fee which was a requirement for non-hotel guests, with a one-time payment of $1 million. Secondly, as a category 3 casino, it was allowed to increase the number of slot machines to 850 up from the previous 600 slot machines for an additional one-time payment of $2.5 million. By making use of these charges, Valley Forge has been able to record the largest revenue increase. The table game revenue decreased by 1% as a result of varied individual casino results.

Apple users in Pennsylvania with a lot of luck 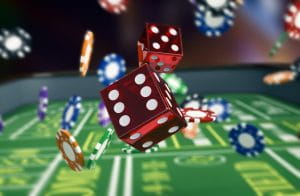 US Gambling industry Review © Gary Mills / A Year in Review: What Change for the US Gambling Industry in 2018?

iPhone users in Pennsylvania will now bet from their phones, thanks to PlaySugarHouse.com, which is a brand of Rush Street Interactive. PlaySugarHouse.com is the first legal casino website, and sportsbook live in the State. By making it mandatory for any app in the Apple app store to be written using the iOS coding, Apple has restricted other operators from entering the markets fully. Rush Street Interactive has, however, developed an iOS-powered geolocation app to bypass the ban. The players will be required to register after which they will be directed to Apple app store and prompted to download the GeoGuard Location Validator. The validator will confirm their location as Pennsylvania. The main aim of Rush street Interactive is to ensure that Apple mobile phone users can play with PlaySugarHouse.com. Players are required to allow the app to access their location when betting and the process is only done once per device.

Earlier this week, Pennsylvania’s regulated casino market went live. This has given interactive gaming manufacturers like NetEnt the opportunity to launch its games in the state. The Pennsylvania Gaming Control Board (PGCB) gave NetEnt an Interactive Gaming Manufacturer Conditional License, through its subsidiary NetEnt Americas, LLC, in March this year. NetEnt says that it is eager to engage the large population of Pennsylvania, which has regulated online gaming.

The managing director of NetEnt Americas said that the company was one of the few online casino suppliers that have offered games from the start. He also said that he could foresee high appreciation of the games by players. He continued to say that although NetEnt struggled during the first half of the year, as a result of the struggling Nordic markets, there was a hope to increase market shares in all NetEnt’s markets.

The State of Pennsylvania has several fully licensed Casinos which offer world-class table games and slots Online gambling is not considered illegal in Pennsylvania, and it is assumed that existing state laws cover online casinos. Within the licensed casinos, you can play live poker, and player defense counts for all the participants. This legalization is what has continuously put the State of Pennsylvania in the winning league of the gambling market in the US.