One of the most popular chefs in the world is taking a risk by joining the online gambling market in the United States. Chef Gordon Ramsay, the popular British celebrity chef and the edgy host of “Hell’s Kitchen,” the popular television show, is apparently beginning to heat up preparations for launching several online casino games following the storyline of his television show. 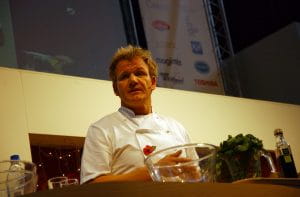 Ramsay also filed an application with the UK Intellectual Property Office to extend Hell’s Kitchen trademark rights to include computer software for casino, poker, and betting games. The 53-year-old chef’s trademark application also contains a platform for online gambling, gambling facilities in the nature of online slot machines and lottery services. Neither the chef nor his firm, Gordon Ramsay Restaurants, has made an official statement or commented on the possibility of planning to run an online casino. When the online gambling games wearing Ramsey’s trademark will be launched is not already known.

Ramsay has restaurants in a few locations all-around in Africa, Europe, China the Middle East, the U.S., but especially, in regards to gambling, he has restaurants located within Las Vegas casinos and all around the Entertainment Capital of the World. When Fox extended his 18-season Hell’s Kitchen Reality TV show previously this year for a nineteenth and twentieth season, it was revealed that the series would be shot from the Hell’s Kitchen restaurant at the Caesars Palace Las Vegas Hotel.

He is Not the Only Celebrity to Join the Gambling World

The facility of the Caesars will seat over 300 guests and overlook the Las Vegas Strip but it continues to be seen whether it will ever have Hell’s Kitchen-themed casino games. Ramsay will become one of the top names for running an online gambling platform if he goes in a way as it is included in his proposal for a trademark. The British TV chef is not the only famous person to extend his name to the world of gambling. Before him, stars such as Michael Jackson, Frank Sinatra and jockey Frankie Dettori joined the gambling world.

Despite this, there has never been an online gambling game surrounding a chef’s story, thus the gambling community is already excited about this new project that Ramsey is preparing. At this point, gamblers can only guess in which way Gordon Ramsay plans to integrate himself or his companies into the online casino or online bingo universe, although there are some ways that are more possible compared to others.

Gordon Ramsey is a Scottish-born chef, restaurateur, food critic, television celebrity and food critic. As already mentioned, he has restaurants in several locations throughout the world and his restaurants were given 16 Michelin stars in total.

In fact, his top tier restaurant known as Restaurant Gordon Ramsey was selected as the top London restaurant in the Harden’s for eight years. In addition, Ramsey is also a host of the reality television show “Hell’s Kitchen” where he is using his extensive expertise in the culinary world in order to help restaurants improve themselves and become better in what they are doing.