The following at the best daily fantasy options at wide receiver for week 14 of the NFL season: 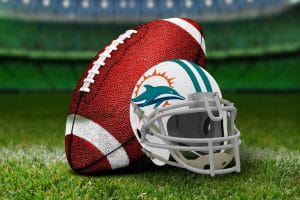 A Miami Dolphins helmet next to a football © jorono from Pixabay

The Miami Dolphins skill position players have all been virtually unplayable from a fantasy perspective this season. However, that’s changed in recent weeks thanks to the emergence of Davante Parker. His career has been somewhat of a disappointment after being drafted in the first round a few years ago but the past few weeks he’s been on fire.

In week 14, the Dolphins play the New York Jets who allow the 9th-most fantasy points to wide receivers. Those who insert Parker into their lineups will be saying, “Dolphins fan here” after what should be yet another productive game.

Michael Thomas is coming off his worst fantasy game of the season with six catches in week 13. A bad game by his standards is a productive one for most wide receivers. He leads the entire NFL with 110 catches through 13 weeks he’s on pace to threaten Marvin Harrison’s record for receptions in a single season set back in 2002.

Thomas will be facing a stingy San Francisco 49ers defense in week 14 but that shouldn’t discourage anyone from inserting him in fantasy lineups. The game will take place in New Orleans and he’s been unstoppable in the dome while immune from weather conditions. Thomas’ least productive home game this season was back in week 4 against the Dallas Cowboys when he caught all nine passes thrown his way for 95 receiving yards.

Davante Adams missed the entire month of October due to injury but he’s clearly healthy now as indicated by recent performances. The Packers are making a push for the playoffs and the combination of Aaron Rodgers passing to Adams is playing a major role. Adams has three touchdowns in the last three games and Rodgers targeted him at least ten times in each of those.

In week 14 the Packers will be facing the lowly Washington Redskins. In week 13 Washington allowed touchdown passes to Carolina Panthers’ wide receivers D.J. Moore and Curtis Samuel. They’re both fine players but not remotely on the same tier as Adams who’s a safe play against a bad team.

The New England Patriots against the Kansas City Chiefs is one of the most anticipated matchups of week 14. Last year they met in the AFC Championship for the right to play in the Super Bowl. Each of the last two times they’ve played the games have been shootouts with fantasy points galore for nearly all skill position players on the field. Julian Edelman is the favorite target of Tom Brady, with at least ten targets in seven consecutive games. He has especially high value in points-per-reception fantasy leagues due to his role as a possession receiver.