Here are the best daily fantasy quarterback options for week 9 of the NFL season:

Dak Prescott has the best fantasy matchup of any quarterback in week 9. The Cowboys play the New York Giants who entering week 8 are about average when it comes to allowing points to fantasy QBs. However, when the Cowboys played the Giants earlier this season Prescott absolutely torched them throwing for over 400 yards and 4 touchdowns without throwing an interception. 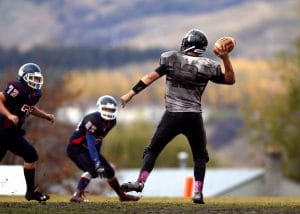 A quarterback throwing a pass © Keith Johnston from Pixabay

Additionally, Prescott’s favorite target Amari Cooper should be fully-healed from injury by week 9. Cooper looked healthy in week 7 with over 100 receiving yards and the Cowboys had a week 8 bye to rest and recover. Prescott was also impressive during the week 7 game against the Philadelphia Eagles, which the Cowboys won in convincing fashion 37-10.

Russell Wilson is having an MVP-caliber season. Through seven games he’s thrown for over 1,900 yards and 15 touchdowns with only one interception. Going into week 9 Wilson has more fantasy points than any quarterback in the NFL. Week 9 is an ideal matchup for Wilson because it’s a home game against the Tampa Bay Buccaneers, who’ve allowed the 7th most fantasy points to quarterbacks this season.

In week 3, the Bucs allowed New York Giants’ rookie Daniel Jones to throw for 336 yards and two touchdowns in his first-ever game as a professional. The Bucs followed that poor defensive effort by heading to Los Angeles, where the Rams’ Jared Goff torched them for over 500 yards passing. Wilson is having a far better season than either of them and shouldn’t have any issues piling up points against Tampa Bay.

Sam Darnold is not among the highest-scoring quarterbacks this season. In fact, he’s near the bottom in total points due to missing a month will a serious illness. In week 7, Darnold had a disaster of a game committing five turnovers and scoring negative points against the New England Patriots. Darnold wore a mic during the game and was heard during the broadcast saying, “I’m seeing ghosts.”

Why would a seemingly confused quarterback who recently had a terrible game and serious illness be a good play in week 9? The Patriots have the best defense in the NFL. All of their opponents have been seeing ghosts this season. The Jets’ opponent in week 9 is at the other end of the spectrum. Darnold will be facing a Miami Dolphins’ defense that has allowed more fantasy points to quarterbacks than any team in the NFL this season.

The Dolphins have yet to win a game and are the worst team in the NFL. Their defense has only forced one interception this season and every quarterback they’ve faced has thrown at least two touchdown passes. Earlier this season Baltimore’s Lamar Jackson threw five touchdown passes against them.

An additional benefit of inserting Darnold into your lineup is that his price will be substantially lower than Wilson’s or Prescott’s in daily fantasy. By going with Darnold instead of the two premier options you’ll have more budget to address other positions in your lineup.