The following are the best daily fantasy running back plays for week 9 of the NFL season. 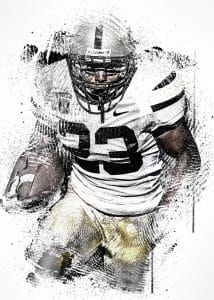 A running back rushing with the football © ArtTower from Pixabay

Dalvin Cook has been an elite fantasy football running back thus far this season and that’s likely to continue in week 9. Cook has gone for over 100 yards rushing in five of the Vikings’ eight games this season and he’s scored a touchdown in every game except one. In week 9, he’ll face the Kansas City Chiefs who have struggled to defend running backs, especially of late.

In consecutive weeks the Chiefs allowed rush totals of 125 from Kerryon Johnson, 132 from Marlon Mack, and 116 from Carlos Hyde, who was cut by the Chiefs during the preseason. Cook is more talented than each of those running backs. He has the additional benefit of having played a Thursday night game in week 8 giving him extra rest compared to the Chiefs who played on Sunday. There’s also a good possibility the Chiefs will be without reigning NFL MVP Patrick Mahomes, who is recovering from a knee injury. If the Chiefs are forced to play with their backup quarterback, their offense will suffer and the Vikings should be able to dominate time of possession.

Ezekiel Elliot has a Monday night game against the New York Giants in week 9. Earlier this season the Cowboys won easily against the Giants by a score of 35-17. If the Cowboys take an early lead in the rematch as expected, they’re likely to keep the ball on the ground feeding carries to Elliot. Yahoo Fantasy’s projections currently have Elliot at 88.3 rushing yards for the game, higher than any other running back.

Also in Elliot’s favor is that the Giants have allowed the 6th most fantasy points to running backs this season. Elliot has yet to have a terrible game this season from a fantasy standpoint. He’s been about as reliable and consistent as it gets for fantasy running backs. Going into week 8 Elliot is currently in the Top 5 for both rushing yards and rushing touchdowns.

The past few seasons we’ve seen rookie running backs have great success. For example, Ezekiel Elliot and Kareem Hunt won rushing titles as rookies. Jacobs has been the premier rookie running back of 2019 and gets a sweet matchup in week 9 against the Detroit Lions.

Jacobs has been battling injury lately but he should be plenty healthy against Detroit, who has allowed the 2nd most points to running backs this season. In week 7, Dalvin Cook blasted through the Lions’ defense for 142 yards and two touchdowns. Despite being less than 100 percent, Jacobs has gone over 120 yards rushing in each of his last two games against the Green Bay Packers and Chicago Bears.

When Jacobs meet the Lions their defense will be without one of their key players cook faced. Before week 8 the Lions traded starting safety Quandre Diggs to the Seattle Seahawks. Diggs was a team captain for the 2019 season and a Pro Bowl alternate in 2018. His departure will surely have a negative impact on the Lions’ ability to defend the run.