Caesars Entertainment has officially announced that they will acquire the entire issued and to be issued share capital of the reputable William Hill. This will happen for approximately £2.9 billion. 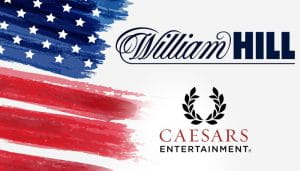 Caesars estimates that the expanded sports and online gaming sector in the U.S. will produce somewhere between $ 600-US$700 million in net sales in FY2021 along with iGaming.

The strategic focus of Caesars remains on the prospects immediately apparent at this point in the U.S. industry. It strongly believes in the proposition that the existence of William Hill in the UK as well as other non-U.S. international markets and oversees a great future of those businesses.

To improve those propositions and give a boost those businesses ‘long-term ambitions, Caesars aims to find suitable partners or owners who have similar objectives and approaches, and who will focus on long-term collaboration and provide value to the customers.

“William Hill’s sports betting expertise will complement Caesars’ current offering, enabling the combined group to serve our customers in the fast-growing U.S. sports betting and online market. We look forward to working with William Hill to support future growth in the U.S. by providing our customers with a superior and comprehensive experience across all areas of gaming, sports betting, and entertainment” – stated Tom Reeg, CEO of Caesars Entertainment.

Chairman of William Hill, Roger Devlin, noted that according to William Hill’s board the best option for the company is a great price for shareholders. The board believes that it recognizes the progress that the company has made over the last year and a half, but also the risk and significant investment required to improve the U.S. opportunity in the strong competition in the U.S. and the potential establishing the company in the U.K and Europe.

Devlin also explained that under the guide of an experienced leadership team, the company has been quite successful and has shown its potential. He proudly stated that William Hill is one of the world’s best betting and gambling companies. In recent years, it has become a company that is diversified by geography and channel. The chairman of William Hill said that the employees will be updated about everything related with this process and that they consider they will have a bright future with Caesars.