Coalisland Fianna’s defender, Corey Skeffington, has made the best decision ever for buying the winning gold scratch card at Loughview Lane, Coalisland, from the newly created Coalisland Fianna ‘Third’ squad. Corey, who is a machine operator at Knockloughrim Quarry in Magherafelt, has promised not to spend the £250k he won on a National Lottery Scratchcard on hasty purchases. 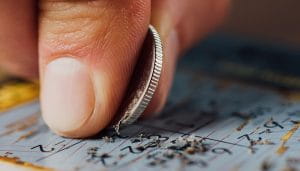 The 23-year-old, who is the third national lottery commercial champion in recent months, lives with his Aunt Edel and Grandmother Maura.

Castledawson ‘s Robert Fullerton won a major £300k in May, while Dungiven’s Shawn Keely won a £1 million triumph in July.

He explained that despite that he was dreaming of winning a lottery, he never thought it would happen to him. However, he claims that he is living proof that it can happen to anyone at any time. Corey said that he buys scratchcards occasionally, but before this, the most he had ever won was £40 or £50.

Excited for winning the national lottery, Corey described the day when he bought the scratchcard. He said that he was going to his friends’ house when he decided to buy a scratchcard. Initially, Corey thought that the card wasn’t a winner, but his opinion changes when he saw the diamond.

“I genuinely couldn’t believe what I was seeing. I didn’t say a word. I just sat there staring at the scratchcard, and I went as white as a sheet – so much so that my friends were asking what was wrong. Without speaking, I showed them the card so they could see for themselves” – said him.

He added that nobody could believe to the point that some of them even thought that it was a prank yet one of his friends confirmed that he bought the scratchcard.

His Family Couldn’t Believe He Won the National Lottery Stratchcard

After celebrating with his friends, he decided to call his aunt and mother and told them the great news. The two ladies thought it was unbelievable, but after he called the number on the back of the card, a woman from the National Lottery Line confirmed his prize.

Corey is a 23-years-old football player from County Tyrone who lives with his mother and aunt. After receiving his funds, he explained that he would like to buy PlayStation 5, go to a holiday to Old Trafford as he is a big Manchester United fan and make his family happy with some gifts.

Brief History of Lottery in the UK

Lottery in the UK officially began on November 19 1994, and while at the beginning it was regulated by the National Lottery Commission, the responsibilities were transferred to the Gambling Commission. The prizes received from the lottery are given to the winners as a lump sum and are entirely tax-free. However, lottery and scratchcards could only be purchased by people who are at least 16 years old. Another rule that should be met is that candidates should buy the tickets in person or via the internet. However, online tickets are only available for those who have a UK bank account and are British residents.