The following are the best daily fantasy options at wide receiver for week 9 of the NFL season: 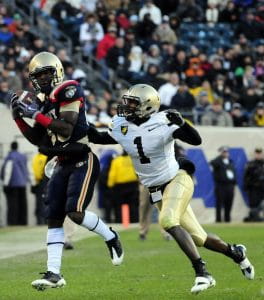 Tyler Lockett has been one of the most consistent fantasy football receivers during the first half of the 2019 season. In standard scoring leagues, he’s scored double-figure points in every game except one. He’s coming off a game against the Atlanta Falcons where he caught all six of his targets for 100 yards. He only has four touchdowns but Lockett is on pace for a monster season with 92 catches and over 1,200 yards receiving.

In week 9 Lockett will face the Tampa Bay Buccaneers who’ve allowed the third-most points to wide receivers. In 7 games this season the Buccaneers have allowed 7 receivers to top 80 yards. Additionally, it’s a home game for the Seahawks where they typically play much better than they do on the road.

Edelman has been on a tear the last four games piling up nearly 350 yards receiving during that stretch. Tom Brady’s favorite receiver has been the beneficiary of volume targets the last four weeks with at least nine targets in every game. With the Patriots planning to release Josh Gordon upon his return from injured reserve that volume appears like to continue.

Edelman caught two touchdown passes against the Cleveland Browns in week 8 and faces the Baltimore Ravens in week 9. The Ravens will look to control possession and the clock which will be challenging considering the Patriots have the top-rated defense in the league. The Ravens are an average team when it comes to allowing points to wide receivers but Edelman’s volume still makes him one of the top plays for week 9.

D.J. Chark is having a breakout season with six touchdowns already and four games in which he had over 75 receiving yards. He’s become the favorite target of Jags’ rookie quarterback Gardner Minshew. In week 8 against the Jets Minshew threw twelve passes to Chark which was a season-high. Also in that game, the Jags other starting wide receiver, Dede Westbrook, left the game with shoulder and neck injuries. He did not return and is currently listed as questionable to play in week 9.

The Jags week 9 opponent is the Houston Texans who seem to get into a shootout every game they play. They’ve allowed the second-most fantasy points to wide receivers. If Westbrook doesn’t play, Chark could have an enormous day. Even if Westbrook does play Chark should still have a respectable fantasy performance.

DeAndre Hopkins will be facing Chark’s Jaguars in week 9. The statistics say Jacksonville has allowed the 13th fewest fantasy points to wide receivers but that’s misleading. They recently traded elite defensive back Jalen Ramsey to the Los Angeles Rams in exchange for draft picks. The loss of Ramsey will certainly weaken the Jags’ pass defense.

Additionally, Hopkins has had a high volume of targets the last three games with 12, 12, and 13. That’s the most targets he’s had in any three-game stretch this season. Look for the Texans to continue throwing passes his way to pile up the fantasy points.