Two of the biggest gaming companies in the United Kingdom have said that they would no longer close down their high street betting shops amid the pandemic that has sent their retail divisions to record losses. 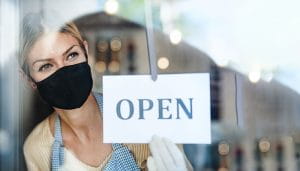 “Clearly I think we are going to see a structural change in the high street more broadly and that will at some level affect William Hill, [but] the experience we provide in the shops is quite hard to replicate online” – stated Ulrik Bengtsson, William Hill’s CEO who closed 119 locations in the early stages of COVID-19.

Jette Nygaard-Andersen, CEO of Entain, who also owns the Ladbrokes and Coral brands, said the firm’s stores had proven fairly stable and that the company will not close more than the typical number of shops per year which makes around 2% of its total estate.

This is awesome news for the UK which has seen high-profile retail struggles as consumers adapted to online shopping during COVID-19.

Internet Gambling Revenues of These Two Companies Increased During Lockdown

Both businesses posted substantial increases in internet gaming as a result of lockout boredom and government-mandated shutdowns of their store locations, prompting gamblers to bet on their phones and computers from the comfort of their home.

William Hill, which now has 1,414 stores in the UK, stated that digital expansion has only partly compensated for store losses, despite reporting marginally higher online gains than its larger competitor.

The threat of tighter enforcement in the United Kingdom, as the government reforms the country’s 2005 gaming rules, has caused both companies to concentrate their energies on foreign expansion.

Entain CEO Remains Focused on Running BetMGM in the US

Entain is negotiating deals in Australia and the Baltics and was the first foreign player to obtain a gaming license in Colombia in December. Nygaard-Andersen said that the company was looking at 50 additional markets where its brands, which include Bwin and Partypoker would be good to join.

MGM, Entain’s US affiliate, has expressed interest in acquiring the company as casino firms begin to aggressively compete for a share of the market in the United States, where states started to consider legalizing sports betting and online gambling back in 2018.

In January, the company turned down an £8 billion offer from MGM, claiming that it was undervalued. MGM eventually pulled out of the contract.

Nygaard-Andersen, who was a non-executive director at Entain prior to stepping over as CEO last month, did not rule out the possibility of the two firms merging, citing their joint venture with MGM as an example. However, she stated that her full focus was now on running BetMGM in the United States.