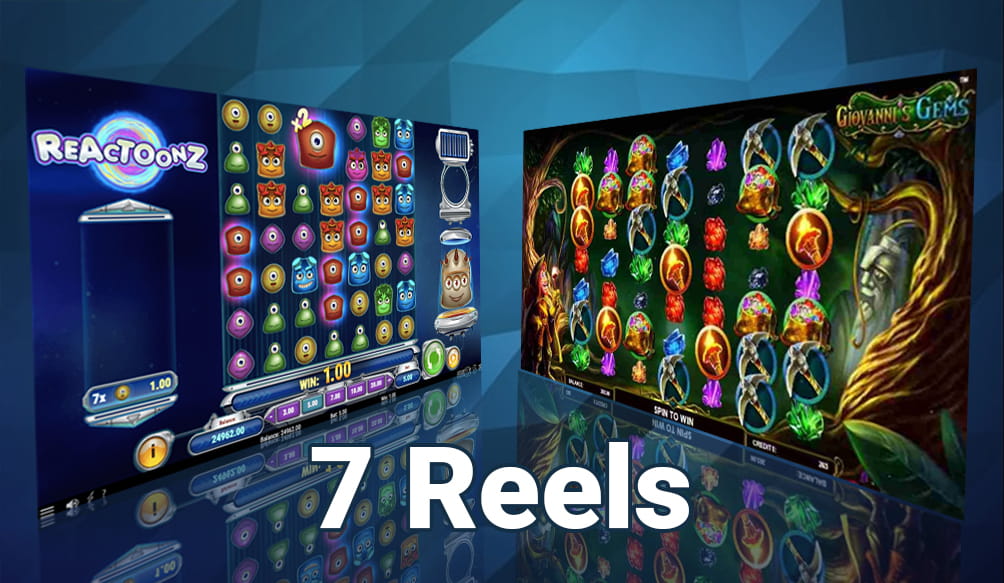 There are a huge number of multi-reel slots around for online casinos, and this can make finding the best 7 reel slot quite a difficult task. Luckily, we’ve compiled a list of our favourite free 7 reel slots so that you can choose the ideal slot option for your preferences! After all, we all like different things when it comes to slots, but there’s no point in playing if you aren’t going to enjoy the experience!

If you’re looking for some of the best free 8 reel casino slots, then look no further than our selection below! Our selections are among the most popular choices for online casino lovers. Best of all, you are almost sure to be able to find a casino that allows free play for these slots online as well-meaning that you can have a spin without risking your money! Not every casino will offer these slots, but when you find one that does offer them, you’re sure to have a great time, irrelevant of whether you wager real cash or virtual currency!

Giovanni’s Gems is a 7 reel slot made by Betsoft and is often said to be either the best or second-best slot game by this particular developer! The slot itself is largely focused on the themes of fantasy and magic, and gamers will enjoy an immersive experience while playing this particular slot. In addition to this, the slot is playable on all manner of devices, including on desktop, tablets, and mobile devices alike!

Giovanni’s Gems is something of a hidden gem (fittingly, it might be added). The slot gives a respectable return to player (RTP) of 94.94%, which makes it one of the more generous slots out there and was released in the latter half of 2017.

As well as being a generally immersive and attractive slot game, Giovanni’s Gems also features a number of special bonus rounds. The bonus rounds are creative and exciting and can land players with huge cash prizes if won! There is also a gamble feature that allows gamers to choose between having a chance at doubling their win—or walking away with nothing. As in many other slots, this is just a simple “pick a card” style gamble feature, but this does not remove us from the immersive nature of the slot itself.

All in all, Giovanni’s Gems is an excellent choice for our list of the best 7 reel casino slots!

Designed with an endearingly cute design, this slot is sure to leave you feeling warm and fuzzy inside! The slot is made using the Play N Go software and is largely based on the theme of cartoons, and gives an incredibly generous return to player of 96% on the dot! It was released for gamers to enjoy in late October 2017 and has gone from strength to strength in that time, making it definitely deserving of a position on our list of the top 7 reel slots free to play online!

Unlike many other slots, Reactoonz does not have a definitive storyline, and this can make playing the game incredibly fun and calming; the cute and colourful little alien blobs that are the main characters of this game are incredibly charming, and the impressive visuals are sure to enthrall you. In addition to this, with wins maxing out at 4,570x your stake, you can be sure for exhilaration when playing this slot! Definitely a worthy title to consider, indeed—and, considering that it is playable on all devices, you’ll never be at a loss for where to play it either.

Much like the aforementioned Giovanni’s Gems, Gemix is also a gem themed slot; however, this title is far more based on cartoonism than fantasy as in the previously mentioned title. The game itself offers up an impressive expected return to player of 96.75% overall, making it a generous slot indeed, despite it being the oldest slot on this list of the best 7 reel slots; it was actually released in December of 2014, meaning that it has just turned 5 years old. Don’t let its age fool you, though; it is still one of the best slot titles from Play’n Go for certain!

Though the game itself is technically based on gems, the gameplay might fool you into thinking that you are actually shopping in a candy store! The graphics are bright and vibrant and colourful, making them truly immersive for sure, and gamers have the opportunity to move through different worlds and levels to collect bonuses as they go. There are also 4 sub-features in the game to explore, making it exciting at every spin and so a great game to consider if you’re looking for a great new choice of 7 reel casino slots to try out!

Released much more recently than the previous titles on this list, Thor’s Lightning is a formidable title and well-deserving of its role as the number one choice of 7 reel slots free for gamers to try out. The slot itself offers an RTP of over 96% for gamers wagering real money and is packed full of exhilarating and exciting features to help liven up the gameplay. One of the most notable features is the free spins round, which is achieved by highlighting the entirety of Thor’s central block of icons.

The game is produced by Red Tiger Gaming and was released in February 2019. It is based on the ideas of Vikings and mythology and is an arguably immersive title that you are sure to fall in love with.

Sometimes, it can be hard to find 7 reel casino slots; these little gems are often hidden by other, more popular choices such as 5 reel slots and the like. However, with a little bit of searching, you’re sure to find an online casino that offers one of the above slots for its gamers to play—and you’ll be experiencing the thrill of 7 reel gaming in no time!